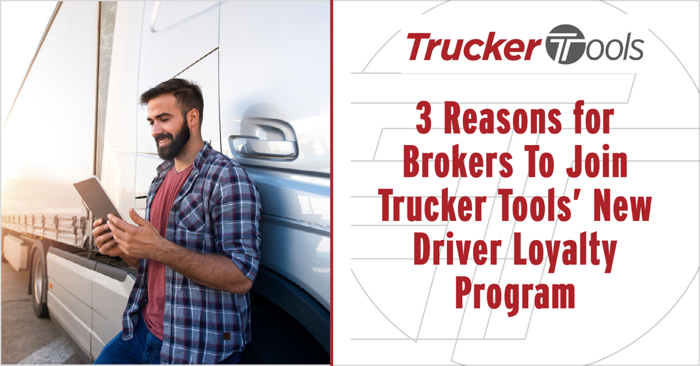 We recently launched a first of its kind Driver Loyalty Program in the Trucker Tools driver app. This new program rewards drivers with TruckerPoints for taking specific actions in the app. Drivers can redeem their accrued TruckerPoints for free gift cards to 200+ different U.S. retailers.

In addition to providing drivers with a means of earning free gift cards for using the app, Trucker Tools’ new Driver Loyalty Program is a powerful tool that freight brokers like you can use to incentivize certain driver behaviors within the Trucker Tools app. You can use Trucker Tools’ Driver Loyalty Program digitize certain aspects of your operations and potentially increase efficiency, while offering drivers a tangible incentive to keep running your freight.

1. Customizable To Suit Your Operational and Strategic Goals

Let’s say, for example, that you’re courting a customer that requires 80 percent visibility compliance for real-time load tracking, but you’re not quite hitting that 80 percent mark yet. To encourage drivers to track more loads digitally with the Trucker Tools app, you could set a reward around start to finish load tracking with the app. In this scenario, drivers would earn TruckerPoints each time they complete a successful load track with the app.

You also can use Trucker Tools’ Driver Loyalty Program to digitize portions of your operations. Digitizing certain communications and interactions with drivers via the Trucker Tools app can increase operational efficiency and your team’s productivity. After all, tracking loads manually with check calls or sourcing capacity manually with phone calls and load boards is time-consuming.

Perhaps you want to reduce the amount of time your team spends on specific tasks such as finalizing rates with drivers. You could set a TruckerPoints reward around drivers booking Book It Now® loads. If you set this reward, drivers would earn TruckerPoints for each Book It Now® load booked. Imagine that you want to streamline how you process payments to drivers. You could create an incentive for drivers to upload BoL and PoD documents via the Trucker Tools app. Each time they uploaded these docs via the app, they would earn TruckerPoints.

Perhaps the most compelling reason to join Trucker Tools’ new Driver Loyalty Program is that you can leverage it to encourage drivers to continue moving your customers’ freight. You also can use the prospect of free gift cards to draw new carriers and drivers into your network. At a time when operating costs for owner operators and fleets are at historic highs, offering free gift cards for hotels, restaurants, sporting goods stores, clothing stores, music and game subscription services, and other goods and services can help make you a broker of choice.

It’s also important to note that digitizing and automating some of your communications with drivers via the Driver Loyalty Program does more than make your business more efficient — it also offers efficiency gains to drivers. When drivers don’t have to answer your check calls, respond to your phone calls about capacity or fax you documents, they also can be more efficient and productive. This added efficiency can further increase the likelihood that the driver will want to continue working with your company.

Note: Now through Nov. 14, 2022, for every Book It Now® load booked via the Trucker Tools mobile app, drivers will earn 100 TruckerPoints.