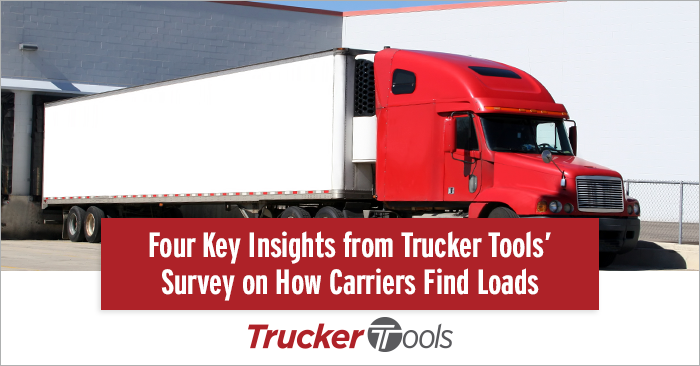 Every month, we survey owner operators, company drivers and carriers to learn more about their challenges, successes and the technology they use in their day-to-day operations. Our most recent survey centered on how drivers and carriers search for and book their loads, a particularly relevant topic given the current capacity shortage. Of those who responded to the survey, 50 percent self-identified as owner operators, 45 percent as carriers, two percent as company drivers and three percent as dispatchers. In the survey, we asked them about their favorite load-finding tools, how often they book loads digitally, how much they spend on load and tracking apps, and whether or not the technology a broker uses impacts their relationship with the broker.

Check out these four key insights from Trucker Tools’ survey on how drivers and carriers find loads.

1. 76 Percent of Owner Ops and Carriers Have Used Apps To Book Loads in the Last 60 Days

One of the first questions in the survey was this: “Approximately how many loads have you booked digitally using an app in the last 60 days?” Of those who responded to the survey, 21 percent reported one to five, 10 percent six to 10, 5 percent 11 to 15, and 40 percent 16 or more loads. Only 24 percent of the mostly carriers and owner operators who answered the survey said that they hadn’t booked loads digitally within the last 60 days. That means that 76 percent of owner operators and carriers have used an app to book a load within the last two months.

If you’re not offering digital load booking to your carrier partners, it may be time to consider doing so since 40 percent of those we surveyed are booking approximately eight or more loads per month with an app. As a user of Trucker Tools’ Smart Capacity broker platform, you can offer digital load booking to your carrier partners via Trucker Tools’ free mobile app and/or free software platform for carriers. Simply post your loads as Book It Now® loads to Smart Capacity and let your carriers book your loads on their schedule.

We asked survey takers about how many load booking, load tracking and other driver apps they have installed on their phones, as well. In answer to that question, 19 percent said they have just one app on their phone, 10 percent two apps, 21 percent three apps, 10 percent four apps, and 24 percent have five or more apps installed on their phones. Approximately 66 percent of those we surveyed also told us that they pay a monthly subscription fee for tools and apps that help them find loads, with nearly half reporting that they pay a monthly fee of $30 or more for the app(s). In the comments section on the question, some said they are paying as much as $150 to $265 each month to get access to tools and technology that help them find loads.

4. The Tech You Use Influences Whether or Not Owner Ops and Carriers Will Transport Your Loads

One of the most significant takeaways from our recent carrier survey is the relationship between the technology that you use as a broker or 3PL and a carrier/owner operator’s willingness to move your loads. According to our survey results, 66 percent of carriers and owner operators are more likely to take your load if you use technology that makes it easy to do business with you. This should serve as a warning to those of you who are asking drivers and carriers to use clunky, outdated or poorly designed technology to search for and book your loads.

Freight brokers and 3PLs such as Trinity Logistics are using Trucker Tools’ Smart Capacity and Book It Now® to offer carriers greater convenience and efficiency. Carriers and drivers have 24/7 access to Trinity’s loads via Trucker Tools’ free driver app or free carrier software platform. With Book It Now®, they can book loads and backhauls with Trinity with a few clicks or taps on a computer or smart phone with no follow-up emails or phone calls needed.

“Carriers are searching for loads and Book It Now® helps us meet them where they are,” says Trinity Logistics’ President Sarah Ruffcorn. “We focus on making Trinity easy to do business with and the Trucker Tools platform helps us achieve that.” Read Trucker Tools Smart Solutions: Three Fundamental Technologies To Create a Self-Sustaining Freight Broker Business to find out how you can use technology to reduce overhead and run a lean, nimble logistics business. Schedule a free demo of Trucker Tools’ Smart Capacity digital freight matching, real-time visibility platform and Book It Now®.