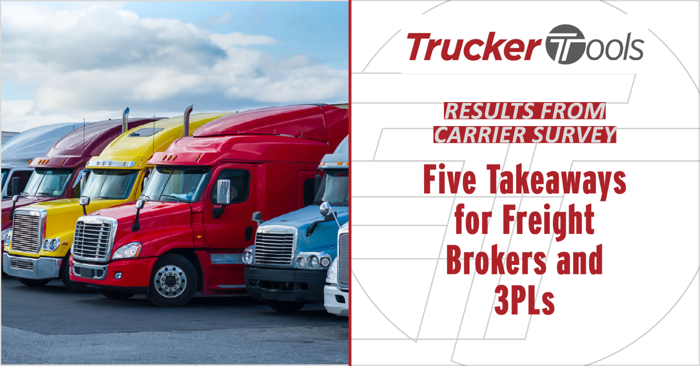 Here at Trucker Tools, we’ve long believed that the best way to find out what truckers need and want is to ask them directly, which is why we survey users of our free app and free carrier software platform several times each year. Most recently we surveyed carriers about how they use technology to find and book freight. More than 150 carriers and carrier representatives responded to our survey, providing valuable insight into how they use technology on a daily basis.

Read on to learn more about the survey and the key takeaways for freight brokers and 3PLs.

About the Survey and Who Responded

Of those that responded to our survey, 86 percent identified themselves as carrier owners and 12 percent as carrier dispatchers. Also notable is that 92 percent of those who responded to the survey book loads for 10 trucks or fewer, which means most of the folks who answered the survey represent small trucking companies. When we asked how many loads each respondent had booked over the previous 60 days, 45 percent reported booking between 11 and 30 loads. Nearly 46 percent told us they’d booked 31 loads or more in the past 60 days.

We also asked carriers, “Do you pay a monthly subscription fee for access to tools that help you find and book loads?” Most of those carriers we surveyed — 72 percent — reported that they pay for access to loads and booking tools. At a time when operating expenses are at all-time highs, every dollar impacts a carrier’s bottom line.

3. 79 Percent of Carriers Pay $30+ Monthly for Load Board Access

At the end of each and every survey we send to drivers and carriers, we ask about any new features our survey-takers would like to see in the future. In answer to this question on this particular survey, several carriers stated that they’d like to see data on rates for specific lanes, markets and types of loads in the technology that they use. The good news is that here at Trucker Tools, we’re soon launching a new rate intelligence feature for our driver app, carrier software platform and Smart Capacity broker platform!

Be sure to read “Simply Offers and Negotiations with Digital Freight Matching.” Schedule a free demo of Trucker Tools’ Smart Capacity platform.