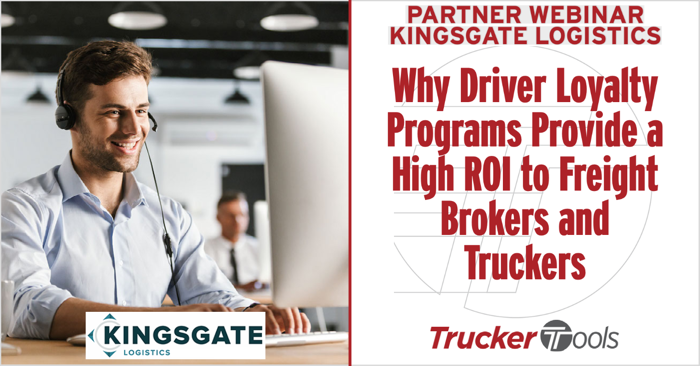 In a recent webinar as part of the Transportation Intermediaries Association’s Lunch and Learn webinar series, Trucker Tools’ C.E.O. Kary Jablonski was joined by Kingsgate Logistics’ Director of Communications Rian Beckham for a deep dive into the benefits driver loyalty programs offer. Moderated by T.I.A.’s Anthony Mascarenhas, the discussion centered on Kingsgate Logistics’ decision to join Trucker Tools’ newly launched Driver Loyalty Program that rewards drivers for interacting with brokers via the Trucker Tools driver app. In the webinar, Beckham offered insight into how Kingsgate Logistics is leveraging the loyalty program to increase driver loyalty and shared driver feedback about the program.

Check out these key highlights from the discussion.

Kingsgate Logistics has been a Trucker Tools customer since 2019 and today uses Trucker Tools’ real-time load tracking, digital freight matching, Book It Now® and Broker Advantage solutions in its operations. According to Beckham, the two companies’ shared goals of increasing efficiency, visibility, transparency and engagement are at the heart of the long-term partnership. For several years now, Kingsgate Logistics had been considered developing and launching its own driver/carrier loyalty program.

“Some of our veterans at the company really wanted to move forward with something like this, but we just didn’t have the right path to move forward with it,” Beckham shared. “I was thrilled when I heard that Trucker Tools was introducing its Driver Loyalty Program. I think it’s an absolute perfect execution. I compare it to something like Open Table where you can book a reservation, earn points and then reuse those points. I love that format. It’s user friendly and something drivers will be excited about using. For us, the major goal is to improve relationships with drivers and increase mutual trust, increase accountability and reinforce good behaviors that lead to better engagement and loyalty, as well as repeat business.”

Trucker Tools’ Driver Loyalty Program was born out of conversations with freight brokerage and 3PL customers who were looking for a loyalty program that would focus on the actual drivers transporting freight. With many loyalty programs, rewards are given to executives or managers, while others only reward carriers who are in network and already working with a freight broker. What’s notable about Trucker Tools’ Driver Loyalty Program is that it is designed specifically for drivers and can be used with both in-network and out-of-network drivers, which ultimately can help brokers bring new owner operators into their networks.

“A lot of times when we think about trying to drive high tracking compliance, we hear brokers talk about incentivizing drivers to track by taking something away,” Jablonski said. “It’s really that ‘stick’ approach where you’re saying to the driver, ‘If you don’t do this, we’re going to withhold pay’ or something like that. We’re turning that on its head to give the driver a carrot, an incentive, instead of a stick. We want to reward and encourage that behavior as opposed to the negative, flip side of that.”

Despite having just joined Trucker Tools’ Driver Loyalty Program two weeks ago, the Kingsgate Logistics team already is hearing positive feedback from both employees and drivers.

“Drivers are excited to be introduced to a program in which they’re being rewarded for good behavior rather than being punished for poor behavior,” Beckham said. “They understand that this is us acknowledging their willingness to be transparent with us. We appreciate the partnership with Trucker Tools and are grateful that there is a tech company like Trucker Tools to help us reach our own business goals. It’s a great partnership and I cannot recommend it enough for anyone who is thinking about investing in better tech for their business.”

Jablonski noted that other brokers who have been participating in the program for several weeks have seen their digital booking offers increase three times over week-over-week.

T.I.A. members, watch the webinar “Why Driver Loyalty Programs Provide a High ROI to Freight Brokers and Truckers” on demand.