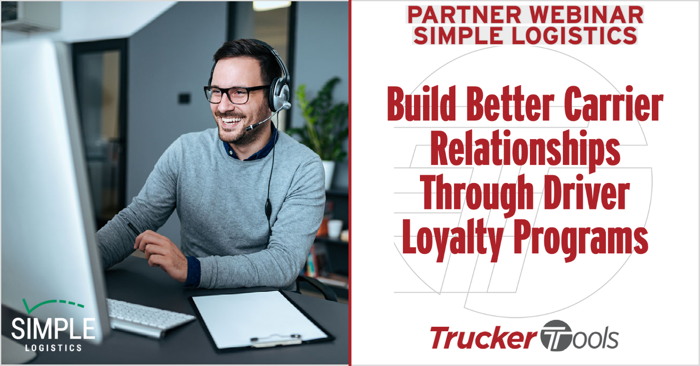 Last week, Trucker Tools’ C.E.O. Kary Jablonski was joined by Simple Logistics’ V.P. of Operations Adam Schaefer for a discussion of the positive impact driver loyalty programs can have on carrier relationships. The webinar, which was held in partnership with FreightWaves, was moderated by FreightWaves’ V.P. of Media Operations Mary Anne Hensley. In the webinar, Schaefer described how the company is leveraging Trucker Tools’ unique Driver Loyalty Program to bring carriers and drivers in-network, increase load tracking compliance to meet shipper visibility KPIs, and encourage more digital bookings.

Check out these key takeaways from the webinar!

“Everything we’ve been doing at Trucker Tools has been focused on driving digital activity, especially among carriers and drivers who might not be digital natives or who might not be inclined to go digital first,” Jablonski said. “As we’ve been working with brokerages over the years, we’ve noticed a trend of coming up with sticks for how to drive tracking compliance and digital bookings. Specifically on the tracking side, we’ve seen some approaches focus on withholding pay if certain requirements that aren’t met. With our new Driver Loyalty Program, we wanted to experiment with flipping that narrative on its head and driving strong tracking compliance and digital behavior with a carrot.”

Jablonski noted that the new loyalty program is deployed in the Trucker Tools driver app and is designed to be as simple as possible for drivers and brokers. Once drivers have downloaded the driver app, they can sign up for the loyalty program for free right in the app. Brokers in the Driver Loyalty Program incentivize and reward drivers for actions such as tracking freight, booking freight digitally or submitting digital offers via the app with a certain number of TruckerPoints. These TruckerPoints are similar to rewards points that you earn with a credit card and can be redeemed immediately for gift cards to more than 200 U.S. retailers. Drivers can collect these points for as long as they want and across brokerages.

“What’s important here is that these rewards are all at the driver level, not at the carrier level,” Jablonski explained. “It’s an important nuance because as we’ve spoken to brokers and have been developing this program, we’ve noticed that a number of brokerages have spun up carrier loyalty programs, but those don’t actually reward the end person in the truck hauling that load.”

“Like Kary said, brokers out there have these loyalty programs in place for the carrier maybe as a whole, but you’re never really rewarding that guy that’s actually behind the wheel putting in the work,” said Schaefer. “So the loyalty program for us is a way to kind of find that middle ground and hopefully build loyalty with drivers. We already know we’re getting quite a bit of foot traffic via Trucker Tools, so why not give them a little bit more incentive to stick around and see what else we’ve got. I think it was a really creative idea and we are happy to try to find that middle ground to get those repeat carriers out there — it’s every broker’s dream, right?”

Previous to implementing Trucker Tools’ new Driver Loyalty Program, Simple Logistics tried several different incentive programs to encourage driver loyalty, including giving away free gift cards, sending personal notes to drivers and naming a carrier of the month each month. Schaefer shared that none of these efforts seemed to translate into sustained driver loyalty. In the short time that Simple Logistics has been using Trucker Tools’ Driver Loyalty Program, the company is already hearing positive feedback from dispatchers and drivers. According to Schaefer, it’s the difference between a cold sales call and a warm sales call.

“It’s been perfect for bridging that gap and the drivers themselves once you start explaining it have a lot of questions about the gift cards and are very interested,” said Schaefer. “The nice thing is you can promote what your company’s looking for. If you’re a company that wants PoDs within an hour, you can give drivers some points for that. It makes it an easy topic to talk about with the driver. You can say, ‘Hey, you just delivered to me — if you submit these receipts to me right now, I’ll give you a few extra points.’ The whole thing is just positive. You don’t run into a lot of negative conversations. I think it just immediately sets you apart on that driver appreciation piece and drives that retention.”

In the three weeks since Simple Logistics rolled out Trucker Tools’ Driver Loyalty Program, the company already has seen its digital offers double, doubling week-over-week. From a tracking compliance perspective, the number of start-to-finish tracks has increased significantly, as has the total number of accepted tracks, which are increasing by double digits week over week.

“Numbers don’t lie,” said Schaefer. “We’ve seen everything from one end of the board to the other go up since rolling out the program. A lot of brokers take a negative approach and say, ‘Hey man, if you don’t track, I’m going to fine you $50 for no tracking.’ It’s just a lot easier. It’s not as pushy. The positive spin has made a huge improvement on that end and our tracking numbers have followed. We always knew we got a lot of foot traffic through Trucker Tools, but now that we’re putting a little point value on there clearly guys are clicking on things that they weren’t clicking on before. We’ve gotten tons of offers on a lot of our loads that maybe didn’t get anything before. We’re starting to see them pop up all throughout the day. There doesn’t seem to be a time limit on anything, too. I’ve gotten notifications that a guy has put offers in at 1:00 AM after getting home. It’s just smoothed out the whole process and put a positive spin on everything. It’s really easy for the ops team to promote.”