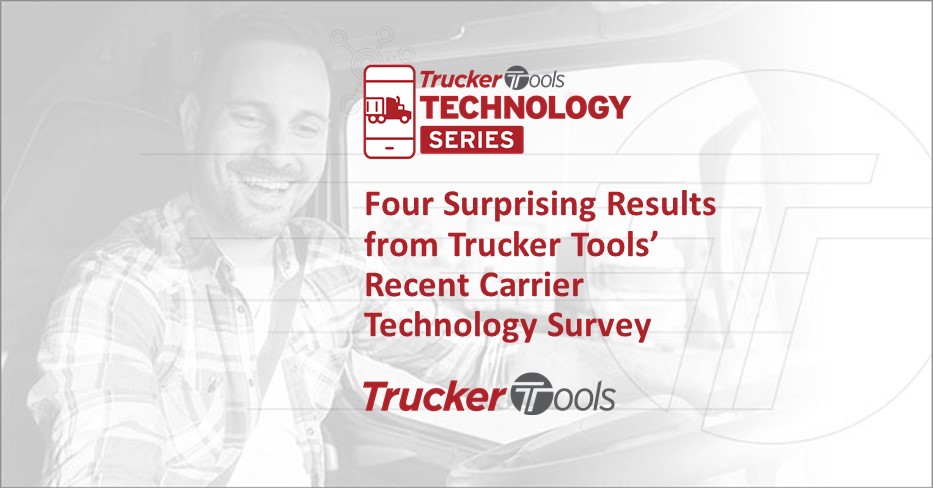 Trucker Tools recently surveyed owner operators, company drivers and carriers like you from across the country to learn more about how you use technology in your day-to-day work. Truckers and carriers were kind enough to respond to our survey, sharing their experiences and thoughts around technology. Of those folks that answered our survey, 40 percent are carriers, 57 percent owner operators and two percent reported that they’re company drivers. Nearly all of those who responded move flatbed, reefer and/or dry van.

1. Most Have Installed Three or More Apps in the Last 12 Months To Meet Broker Requirements

When we asked about needing to install new apps to fulfill brokers’ requirements, we received a range of answers. However, nearly half of those who answered our survey said that they’ve had to install between three and 10 or more apps on their phones in the last year to satisfy brokers. Only four percent who answered said that they don’t use apps because they prefer check calls. In the comments, several carriers/truckers voiced their frustration about the number of different apps they need to use to track loads.

Another surprising result from Trucker Tools’ recent carrier technology survey is that two-thirds of truckers and carriers are paying a monthly fee to access load boards and other load-finding technologies. In fact, 45 percent of those who answered the survey pay $30 or more/month to use these apps or load boards when they’re on the road. Some told us that they pay as much as $140/month on digital technology to help them find loads.

Fact: The digital load search and booking tools included in the Trucker Tools mobile app are free. You can quickly search for loads with your favorite brokers in specific lanes in just a few seconds.

3. 87 Percent Use Technology on the Road on a Daily Basis

We sometimes hear people in the industry say that truckers and carriers are resistant to using technology, but that definitely isn’t the case and this survey proves it! Smart phone technology plays a big role in the daily lives of truckers and carriers. A whopping 87 percent of those we surveyed said they use technology on the road every day. In the comments, respondents told us they most value technology that helps them find fuel, routing, parking, loads, truck stops and more.

Fact: Trucker Tools’ mobile app includes 17+ features and tools that save you time and money on the road. With the free app, you can find the cheapest fuel on your route, parking, routes, loads, truck stops, rest areas, Wal-Mart stores, food, restaurants, CDL legal protection, truck washes and more.

Fact: The Trucker Tools app’s load tracking provides transparency for the driver. You have to accept a load track in order for tracking to begin. It’s easy to see when tracking is on and who is receiving location information. You also have the power to stop or pause tracking right in the app.