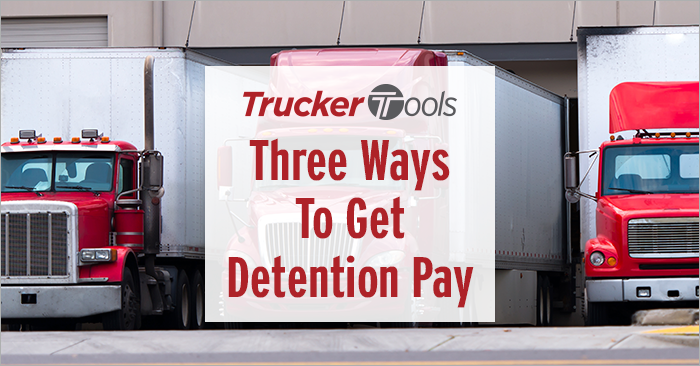 Detention affects more than just your ETAs. According to the Owner-Operator Independent Drivers Association’s 2020 Detention Time Survey, detention impacts hours of service, revenue and safety. The OOIDA detention survey also shows that detention time costs truckers up to $1.3 billion/year and carriers as much as $1.6 billion/year.

If you’re an owner operator or carrier who is frustrated with not being paid for detention, read on to learn about three strategies that you can use to get detention pay.

The industry standard in most cases is for trailers to be loaded or unloaded within a two hour time frame. When detention time goes above that two-hour mark as it often does, that is when detention pay typically is requested or required. The rate of detention pay varies. In some cases, it may be $25/hour. Experienced owner operators and carriers report receiving up to $100/hour for detention time that extends beyond two hours.

Use the Trucker Tools App for Load Tracking, Proof of Documented Dwell Time

Even when your dwell time is more than two hours, you may need to provide documentation of the detention time to the broker, 3PL or shipper in order to receive detention pay. Providing your cell phone call history as documentation of check calls to and from the broker may not be enough. When you use a third-party technology like the Trucker Tools app to track a load, you have concrete evidence proving that you were detained, evidence that you can use to get detention pay. You can take a screen shot of your load track in the Trucker Tools’ app to send to brokers, 3PLs and shippers. Trucker Tools’ mobile app uses the GPS tech in your smart phone for load tracking, which means this documentation can’t easily be faked when you track loads with Trucker Tools. If you’re worried about your location being tracked after the load is delivered, keep in mind that you can pause or cancel a load track in the Trucker Tools app. When you’re actively tracking a load with the Trucker Tools app, you always can clearly see who is receiving the location data, as well.

When you run a load for a broker or 3PL who uses Trucker Tools for load tracking, the broker/3PL also has the option to set up detention alerts on their end. Trucker Tools’ detention alerts automatically send the broker a message when your dwell time goes beyond two hours. If your contract stipulates a three hour threshold or other time frame, the detention alert can be customized to reflect that.

Use Your ELD Data To Document Detention

You also can use your ELD data for the load to document detention time to help you get detention pay. Most ELD providers have a web interface or mobile app that you can use to manage your ELD’s settings and data. You can download the data for the load from the ELD web interface and send it to broker, 3PL or shipper. If the ELD provider has a mobile app, simply take a screen shot of the ELD data showing your dwell time and send it along to the broker or 3PL to make your case for getting detention pay.