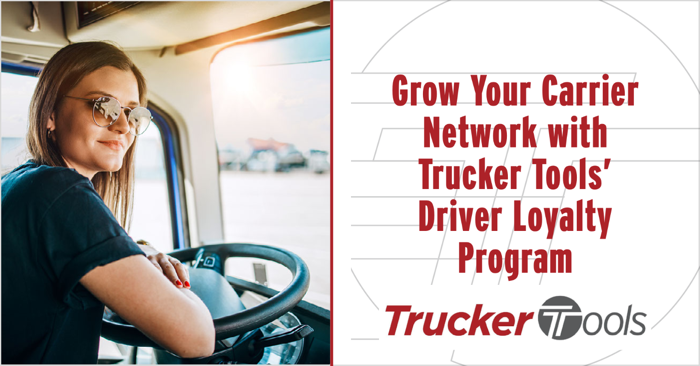 If you’re freight broker or carrier rep working in in a logistics company, you likely spend a lot of time searching for, negotiating and securing truckload capacity one load at a time. It goes without saying that a sizable and reliable carrier/driver network makes your job easier. When you have a robust capacity network, it’s easier to cover your customers’ loads, including those loads that require special handling and those lanes that are hard to cover. The trick, of course, is to create incentives for carriers to remain in your network and keep transporting your shippers’ freight.

In this blog, you’ll learn how you can use Trucker Tools’ newly launched Driver Loyalty Program to grow your carrier network, become a broker of choice among carriers and drivers, and increase efficiency in your operations.

Trucker Tools’ new Driver Loyalty Program is designed to digitize and streamline communications between freight brokers like you and the drivers and carriers with whom you work via the Trucker Tools driver app. When drivers complete tasks such as uploading BoL or PoD documents and sending them to you, tracking loads or booking loads through the driver app, they earn TruckerPoints through the loyalty program. The TruckerPoints that drivers accrue can be redeemed for free gift cards to more than 200 different U.S. retailers. Participating retailers include popular restaurants, food delivery services, grocery stores, auto parts stores, music and game subscription services, streaming TV services and many other types of retailers. These free gift cards can entice drivers and the carriers for whom they work to stay in your network.

When you join Trucker Tools’ Driver Loyalty Program as a participating freight broker or 3PL, you have ability to customize driver rewards to meet your company’s specific needs. For example, you could create a reward for drivers who book your company’s Book It Now® loads via the Trucker Tools driver app with the goal of building carrier loyalty, but also with the goal of reducing the labor costs associated with capacity sourcing. Alternatively, you may want to digitize how drivers submit BoL or PoD documents to your team. If so, you could award TruckerPoints to drivers who upload documents and send them to you via the app once loads are delivered.

In a recent webinar about the loyalty program, Simple Logistics’ V.P. of Operations Adam Schaefer spoke about the results the company has seen in the short time since joining the program. Since introducing Trucker Tools’ Driver Loyalty Program to its carrier and driver network, Simple Logistics’ digital offers have doubled week over week. Start to finish load tracks have increased significantly, too.

“Numbers don’t lie,” said Schaefer. “We’ve seen everything from one end of the board to the other go up since rolling out the program. Now that we’re putting a little point value on there, clearly guys are clicking on things that they weren’t clicking on before. We’ve gotten tons of offers on a lot of our loads that maybe didn’t get anything before. It’s just smoothed out the whole process and put a positive spin on everything. It’s really easy for the ops team to promote.”